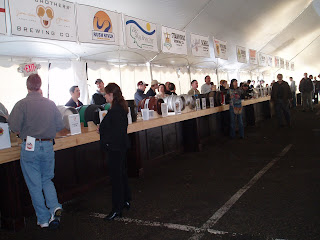 Yesterday's Firkin Fest at The Happy Gnome was quite impressive. They had something like 66 casks of beer, compared to around 20 last year. And the brewer turnout was great. They may have had more firkins than the real ale tent at the Great Taste of the Midwest. The set up and overall format worked well also. $1 a ticket basically got you one sample. Here's what I liked and didn't like about the event.

Liked
Didn't Like
Overall - a nice event and a great way to kick off spring. Thanks Happy Gnome.
Posted by Mag at 6:40 AM