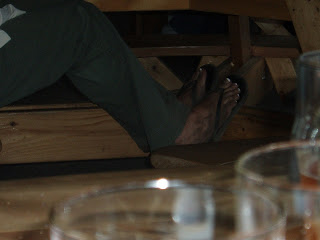 Last night we decide we were up to a 5th beer stop for the day so we headed to Founders, just a couple miles from the hotel. Inside they had the hockey game cranked up and between that and people talking it was very, very loud. So we decided to sit outside. A little chilly when the wind came up, but doable and much more conducive to holding a conversation.

On to the photo. A couple sat down at the table next to us. A decent looking couple that I suspect were on a date. The girl looked quite presentable, EXCEPT FOR HER FEET! I don't know that this photo does the dirt and grime justice but if all you saw were her feet, you'd think she was a homeless person that had not bathed for two weeks. Who goes out in public like this?

The beer glasses on the table provided a nice cover for the picture I took as they did happen to look over.
Posted by Mag at 6:23 AM