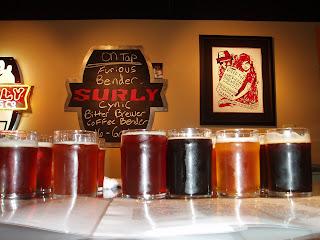 Studies show that volunteering is not only beneficial to an organization and the people it serves, but that the volunteer reaps benefits from the experience. True dat!

Last night Mag and I volunteered at the Surly tour and aside from the traffic I had to battle from Eagan to Brooklyn Center, it was a great time. Our coordinator, Keith, had assigned us to what I considered the easy job, pouring, leaving the more technically challenging job of running the cash register and credit card machine to volunteers already well versed in that area.

As I pulled up there were already some people waiting outside for the tour and I found out once I got inside that Kare 11 was filming inside the brewery for a story. While they were talking to Omar’s dad, I had the pleasure of trying a bomber of Imperial Red from California one of the volunteers had gotten through a beer exchange. It was a very well balanced red, being neither too sweet nor too hoppy and a treat since it is unavailable here. The generosity of the beer folks I’ve met never fails to impress me and I vowed the next time I volunteered to make sure to reciprocate.

Each tour participant was allowed five samples and although I’m not sure how many came for the tour, I can say the beer was flying off the counter! Some people were well versed in Surly, some had tried two or three previously, and some appeared to have not tried it at all before. But everyone was open minded and if anyone didn’t like the beer, I never saw it.

It was great to see the interest in people wanting to know more about the beer, more about the brewery. There was even a guy who was in town on business, from Alaska I believe, that had been to Summit, Flat Earth, Great Waters and thought he might be able to hit Town Hall later in the evening, before leaving town Saturday morning. A guy after my own heart!

The tours are hugely popular, currently being booked solid until the last Friday in May, so I hope to be back pouring again sometime in the next couple months.