So the calendar might have said it was Saturday, but according to the pilgrimage itinerary it was hump day. A day in which we didn’t travel quite as far as the day before, this time heading west-ish to Holland, Douglas and Spring Lake.

We made it to the New Holland brewery a bit before their noon tour started and found a couple of other beer geeks waiting to do the same. Pretty much a standard tour, with one exception. In their grain room they had bags of specialty grains that we were able to sample (yes, eat!). The variation in flavor was as great as the variation in color and the opportunity to taste test the grains a treat.

Once the tour and requisite sampling was done we headed over to their brewpub for lunch and a more extensive beer tasting. My favorite there was the Poet oatmeal stout, which if I’m remembering correctly, tasted almost identical to the most heavily roasted of the grains I’d eaten at the brewery. Go figure, right?

From there it was time to check out Saugatuck/Lucky Stone Pub, a combination brewpub/brew on premises operation. There wasn’t much character to be found in the physical location or their brews, but to be fair, they are a pretty new operation that seems to still be working out the kinks and the bartender did hail from MN. 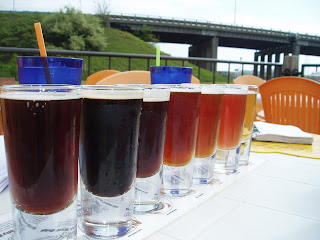 Finishing there, it was off to check out Old Boys Brewhouse, which we’d heard might be a bit difficult to get to, even though you could see it from the main road. I’ll agree with that if you’re the only one in the car but with four pairs of eyes we faired just fine. Taking advantage of the nice afternoon we sat on their deck that overlooks part of a lake. Overall, the beers were pretty good (and photogenic), with me being the odd duck out favoring their Dogtail IPA while the rest of the crew thought the Brown Ale was the best of the bunch.

After the short drive back into Grand Rapids it was decided that we weren’t quite ready to turn in and having had such a nice time at Founders the previous night, returned. More packed than the night before we were nearly out of luck but managed to score a picnic table just a couple away from where we’d been before. More sampling and also returns to favorites from the night before. Then came a wonderful mix, inspired by the previous weekend’s Surly Suicide, Imperial Bourbon Barrel Aged Stout + Cerise. Liquid chocolate covered alcoholic cherries! You’d be right guessing that after a couple hours there it was indeed time to pack it up.
Posted by Mag at 2:54 PM