Our final full day of drinking was to be done without the hassle of driving outside of Grand Rapids, starting with Grand Rapids Brewing. Since we were running ahead of schedule we decided to swing over to Schmohz Brewing, which we intended to visit later in the day, to verify that they were in fact open. Good thing we did since although their website said they were, they appeared closed from the exterior and a call placed confirmed that they had decided to close for both Sunday and Monday this week. Disappointed and frustrated, we headed over to Grand Rapids, a cavernous brewpub that while opening at 11 am, apparently was unable to sell alcohol until noon.

We decided to wait it out at and once the beer was flowing we found it to be drinkable, albeit highly carbonated across the board. Surprisingly, the best in show here went to an unlikely suspect, Grand Rapids Light. Overall the beers were good, they were not good enough to hold our interest once we’d made it through the line up. Instead of the planned visit to Schmohz, we headed back to Red Ball Café, remembering that they had five or six respectable taps and good food. 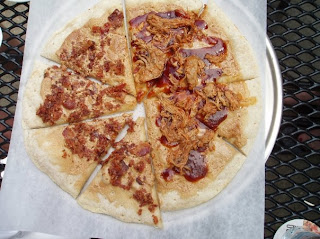 There we enjoyed beers from New Holland, Founders and Bell’s on their patio along with pizza. A huge thanks goes out to both Kaitlyn, our server, and Vinny, the chef, for agreeing to make my creation: a half-and-half pizza featuring peanut butter and bacon on one side and peanut butter, BBQ sauce and pulled pork on the other. Neither the burning of the first attempt nor the scooping out of the peanut butter from those little single serving Smucker’s packets deterred him and in fact he treated us to an enormous piece of delightful house made carrot cake afterward. 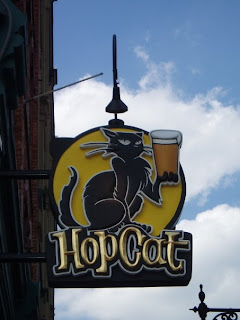 From there, although at least an hour before our scheduled dinner with Kat’s family, we hit HopCat. This was another late in the game addition but one of the best parts of the trip. We spent most of the night on their patio, met Mark (the owner), enjoyed some special bottles out of their cellar, met Steve (the cellar manager), and got a private tour of the brewing and cellaring set up. For me the most outstanding beer of the night was Arbor Brewing’s Saison with Brettanomyces. Not a fan of true to style Saisons, the addition of Brett did something magical to it. After close to six hours reveling in the beers and atmosphere and exhausting their extensive beer list we called it a night. What a way to say good-bye to Grand Rapids!
Posted by Mag at 7:43 AM